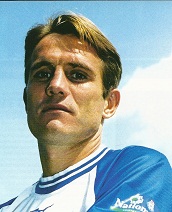 Parkinson, a former Southampton trainee made his Football League debut in 1988 with Bury, and later joined Reading for £50,000 in July 1992.

He was named player of the season two years in a row (1997–98 and 1998–99) and was also a key member of the 1993–94 Football League Second Division championship-winning team. He captained the team to promotion from the Second Division in 2001–02 and soon after promotion success, Parkinson celebrated his testimonial year with a memorable night at Madejski Stadium, where 20,000 fans watched former Reading team-mates such as Shaka Hislop, Michael Gilkes and Jeff Hopkins take on an England XI including the likes of Paul Gascoigne, John Barnes and Chris Waddle.

Although Parkinson rarely featured on the field in his final season as Reading returned to the First Division, he remained a hugely respected member of the squad until his departure to Layer Road as manager of Colchester United.

In a vote to compile the Royals' best-ever eleven, Parkinson was voted the best central midfielder with 60.3% of the vote. Parkinson is still sung about in the terraces today (his song, "Five Parkinsons", is sung every Christmas).